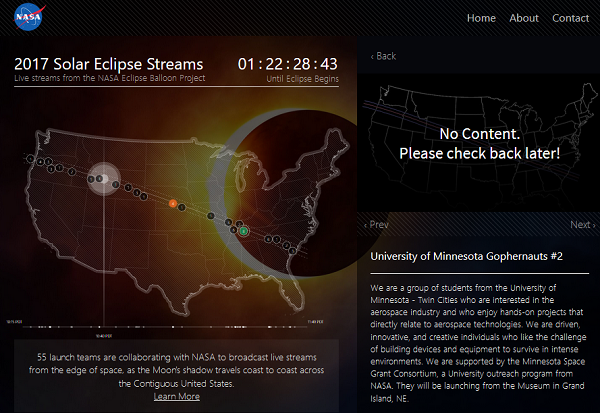 Digitally speaking, the upcoming solar eclipse that will cross America on Aug, 21st is a big deal. So much so that I was going to try to compile a list of interesting websites and stories to showcase ways to interact with the eclipse digitally other than just watching it (which of course you know you shouldn’t watch directly…). And then I found this article by Elizabeth Wawrzyniak, “The August 2017 Eclipse in Digital Media.”

The article and Elizabeth are part of a very interesting project called The Digital Scholarship Lab at Raynor Memorial Libraries at Marquette University, right here in Wisconsin. (more on that in a future blog)

In a piece that crisscrosses between general info and techie, with a bit of “wow, how super cool is this” she provides a lot of info. For example, she writes “this event in particular is special: it’s the first time since 1776 that an eclipse will be exclusively visible in the contiguous United States.” Since the birth of our nation! Super cool.

Among the many great links Elizabeth has compiled are:

“NASA Livestream”  which involves 55 launch teams that are collaborating with NASA to “broadcast live streams from the edge of space, as the Moon’s shadow travels coast to coast across the Contiguous United States.”

Now that is interesting enough in itself, EXCEPT, we’ve got some folks in that group!

“We are a group of students from the University of Minnesota – Twin Cities who are interested in the aerospace industry and who enjoy hands-on projects that directly relate to aerospace technologies. We are driven, innovative, and creative individuals who like the challenge of building devices and equipment to survive in intense environments. We are supported by the Minnesota Space Grant Consortium, a University outreach program from NASA.”

There will be three groups of Gophernauts launching from the Museum in Grand Island, NE.

As the Great American Eclipse website (another stellar Elizabeth suggestion) posted, “An eclipse is a cosmic billiard shot — the Sun, Moon, and Earth line up to reveal the Sun’s atmosphere.”

There will be a lot of people lining up to take their shot at being part of that experience, but if you can’t be along the eclipse line then Elizabeth’s’ article gives you access to many digital ways to still feel connected to the event.

(Photo from the http://eclipse.stream.live/ website; countdown numbers shown as of time taken from site)

Strategies and solutions for your digital marketing.